Posted at 14:09h in Blog, Current Events by greiBO
Share 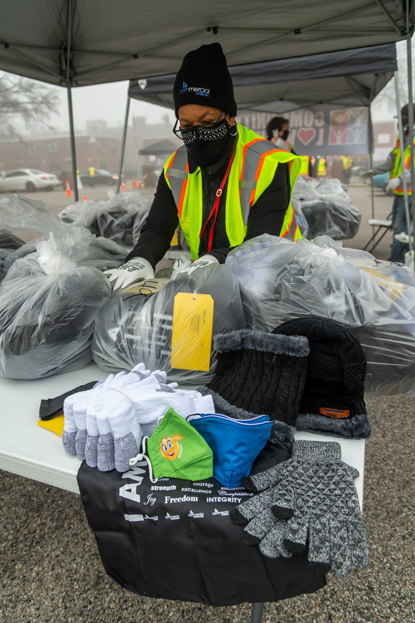 Commercial Group distributed masks and other essentials to the residents of Perkins Homes on Saturday.

Bianca Thompson is raising four children – three of her own and a nephew in her custody. When COVID-19 hit, Thompson, who works 12-hour days at H&S Bakery, had to figure out how to juggle breadwinning with overseeing virtual learning for her 15-, 10-, 7- and 6-year-old children. And since she didn’t have the luxury of working from home, Thompson said she routinely relies on the help of others because she has no other choice.

Thompson was one of about 300 current and former Perkins Homes’ residents who lined up Dec. 12 to receive masks and other winter essentials. The giveaway was organized by Commercial Group, a family of development and construction companies based in Hanover, MD, that does the bulk of its work in Baltimore City, including previous and current work on the new Perkins Home development.

“In this era of COVID-19, we can’t take away the pain that this pandemic is causing, but we can show residents of Perkins Homes that they are cared for and not alone,” said Kevin Johnson, CEO of the Commercial Group. The firm gave away masks, socks, hats, scarves, gloves and other winter essentials, and headphones for students who are engaged in online learning. Many of the items included in the giveaway carry inspirational messages such as ‘I AM Brilliant’ and ‘I AM Strength.’ “We wanted every item that we gave to residents to have special meaning that shows hope and a future.”

Reports show that 2020 is an unprecedented year for philanthropy and that Commercial Group is not alone. GivingTuesday, the largest global generosity movement and its GivingTuesday Data Commons estimates that 34.8 million people participated in GivingTuesday 2020, a 29% increase over 2019. Further, GivingTuesday reports total giving increased from $1.97 billion to $2.47 billion in the United States alone, representing a 25% increase compared to GivingTuesday 2019.

“This groundswell of giving reaffirms that generosity is universal and powerful, and that it acts as an antidote to fear, division, and isolation,” said Asha Curran, co-founder and CEO of GivingTuesday, in a press release. “Throughout this year, we have seen people driving extraordinary efforts rooted in a pursuit of equity, community, and shared humanity–driving giving and action across all races, faiths and political views. We know that when we act collectively– what we can, with what we have, from where we are–we can make massive change happen.”

Sherry Brown, who was formerly a Perkins Homes resident, and works three jobs and had COVID-19, said efforts like the Commercial Group giveaway for residents at Perkins Homes is appreciated, especially now when so many people are losing jobs and hope. “This event is big and residents appreciate all that is done for them,” Brown said.

Urban Strategies, Inc., a national non-profit organization that provides family support and community development services, with offices in Baltimore, and transformation efforts in more than 24 cities and 40 neighborhoods, was responsible for identifying current and former Perkins residents for the giveaway.

“USI was grateful to partner with Commercial Group,” said Ernestine Chambers, USI senior project manager. “Commercial has continued to show up for the needs of this community. This event is just proof that people matter.”