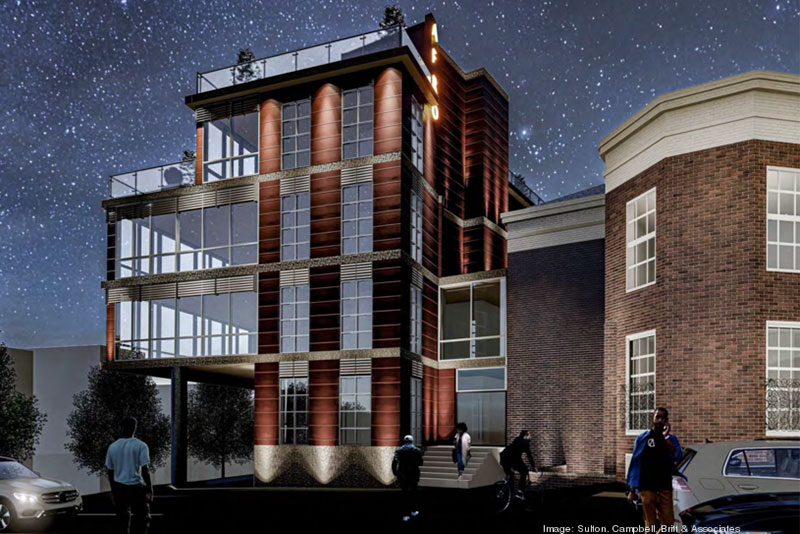 Work on a new, state-of-the-art home for The Afro-American Newspapers in West Baltimore could begin by this fall if all goes according to plan at the historic Upton Mansion.

Renderings shared with the Baltimore Business Journal by Afro Charities, the philanthropic arm of Baltimore’s longstanding, family-owned Afro Newspapers, show a planned $7 million headquarters in Upton, holding everything from newspaper offices and media rooms to small theaters and community spaces.

The project will provide new offices and room to grow in a grand homecoming for The Afro, which was founded in Upton in 1892 but has since moved and is currently based in Halethorpe. But the building expansion also aims to provide a center geared toward education, as well as flexible meeting spaces for nonprofits and other community groups around Baltimore.

“It’s a challenge because if we only stuck to the existing structure, we really couldn’t do all the things programmatically that [Afro and Afro Charities leadership] want to do,” such as holding The Afro’s archives and learning space for students from nearby Furman L. Templeton Elementary/Middle School, said Lisa Hodges-Hiken, principal of Hodges Development.

The most eye-catching part of the designs from Harbor East-based architecture firm Sulton, Campbell, Britt & Associates is a four-story addition on the back of the former mansion at 811 W. Lanvale St. Renderings show a structure lined with large windows to bring in plenty of natural light, as well as terraces and a lit-up sign announcing the presence of Baltimore’s Black newspaper that’s been running for six generations.

Other partners on the $7 million project include Commercial Construction as the general contractor, accounting firm Abrams Foster Nole and Williams P.A., and law firm McKennon Shelton and Henn LLP. Upton Planning Committee helped recruit The Afro back to redevelop the site in West Baltimore. Hodges-Hiken said project leaders also plan to issue a request for quotes from leasing agents soon.

Savannah Wood, director of Afro Charities, said the designs are “essentially a first pass at what that building might look like” and aim to show what “would be a really state-of-the-art facility…with really stunning views of downtown.”

Hodges Development is working within historical preservation parameters to ensure approval from the city’s Commission for Historical and Architectural preservation for the design.

Though it’s fallen into disuse in recent years, Upton Mansion is the city’s last surviving Greek Revival country house and has been a city-designated historic landmark since 2008. Maryland Magazine and Preservation Maryland included the 183-year-old building on a list of the most endangered buildings in Maryland in 2009.

Hodges Development and The Afro, which the city’s Department of Housing and Community Development tapped to redevelop the building in February 2020, are making sure it maintains the same historic sight-lines from the street, Wood noted. Renderings show the addition on the back will use darker colors complementing the brick of the nearly two-century-old property out front.

And that it will. The redevelopment will add two green terraces with grass and other vegetation and will be designed with overall energy efficiency in mind. Those details are still being hammered out, but Hodges-Hiken said partners hope to employ renewable energy sources and a tightly sealed building envelope — as much as they can add without disturbing the historic grounds — with environmental and economic sustainability in mind.

“When you’re working with a nonprofit, as a developer, you really want to make sure that their operating costs are as low as possible,” she said. In this case, that means investing the money up front to ensure the owner, Afro Charities, can benefit from low energy bills and generally reduced operating costs.

Currently, archeology students from the University of Maryland and other area schools are conducting a study of the grounds to “make sure that when we go to build this additional building on the back, we aren’t disturbing any artifacts,” Wood said. Hodges-Hiken mentioned plans to make the most of those findings, including putting discovered items on display as a “public architecture project.”

Gears are otherwise in motion. Wood said a groundbreaking is anticipated by the fall, and Hodges-Hiken said the city DHCD and project partners are finalizing a land disposition agreement that’s expected to go before the city’s spending board in the coming weeks.

Financing is being lined up, with underwriting for predevelopment and construction loans from The Reinvestment Fund and the state’s Neighborhood BusinessWorks program, respectively, as well as New Market Tax Credits and federal historic tax credits.

In addition to leaving The Afro with minimal debt and a modern new headquarters, Hodges-Hiken said the hope is that this development — in tandem with other projects nearby led by the Upton Planning Committee and the Black Arts District — can catalyze progressive, community-forward redevelopment.

“We’re hoping we will kind of be able to be the centerpiece of a more walkable and active neighborhood so we can go back to the days when people were taking those long walks and seeing those historic buildings,” she said, “having that urban life that [urbanist and sociologist] Jane Jacobs talked about — active streets, in a good way.”